Anne Marie Iniguez / May 5, 2016
I’m always trying different dance classes to see what works for me and Matt’s LA Latin: Fun & Fitness class definitely SLAYS. Lucky for us, we get to work with him here at Hip Shake Fitness and we get to show the world his fancy feet and charming personality.

What did I expect from an LA Latin workout?

When I hear the words Latin and dance combined, I think about hips. So I expected a lot of hip movements and Salsa dancing and A LOT of work for my calves. My only experience with Latin dance are a little Bachata, Argentine Tango and of course, Zumba. But Zumba never really did anything for me so I’m very excited to try Matt’s class. I’m very curious as to what other styles of dance will be incorporated in the class and what makes LA Latin stand out from the rest.

I have interviewed Matt Mancuso about his craft, his life and his choreography process for his fitness classes, LA Latin Fitness being one of them, before taking his class. It was really amazing to see how passionate he is about his class and dance in general. In the beginning of the class, I literally got lost in his fancy fast footwork, but he does make it easy to follow along. Matt’s charisma shines through his class from singing along to the songs to making fierce faces while dancing– definitely an actor trait! He tries to interact with his students during the choreography which builds close connections and I know that that’s one of the many reasons why they keep coming back.

He tries to interact with his students during the choreography which builds close connections and I know that that’s one of the many reasons why they keep coming back.

I was pleasantly surprised at how Matt mixes Latin dancing with a bunch of different dance styles. He used Swing dance moves like the Lindy Hop together with basic Salsa steps which I never thought could be combined. He also uses basic Hip Hop grooves and gradually increases the speed to make you sweat! What I love is that he has a playlist for his class which helps his students grab on to his choreography for next time. Sometimes it is a little daunting to take a class that always has a new song and choreography so this was definitely refreshing to see.

Dance workouts that stood out for me

Of course, as a musical theatre actor, I was attracted to the Broadway tracks that Matt included in his playlist. But in my defense, they were also the most complicated and fun! In this choreography, there were a lot of moves that traveled around the space. I’m 5’1 and I LOVE showing off how much space I can take up so I enjoyed this dearly.

One Direction – Kiss You

Normally, I run away from One Direction songs because it is not my cup of tea, but Matt’s choreography for this song just made it so likeable. There were a lot of pop choreography intertwined with ballet-ish jumps that my calves appreciated. Matt’s infectious dancing and personality helped too.

Hairspray- You Can’t Stop the Beat

Lastly, I know, another musical. You can’t listen to this song without dancing and that’s a fact. What I loved about Matt’s choreography is the blend of Lindy Hop and travelling. It is a long song too so it also took a lot of stamina to finish, but it felt so good striking that last pose!

If you’re around Hermosa Beach, check out Matt’s LA Latin: Fun & Fitness class at You Can Dance Studio and stay tuned for his Hip Shake Fitness dance workout videos as well. Don’t forget to pledge on our Kickstarter to get early access to our dance workout videos. Join the movement & let’s dance!

Dance Your Glutes Off Challenge 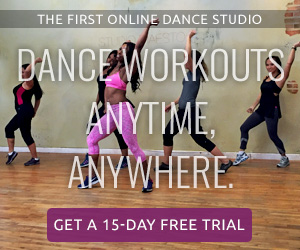